If you are considering having neck surgery, you should know whether a spine neurosurgeon vs orthopedic surgeon should perform your surgery. A new study looked at the outcomes of neurosurgeons vs orthopedic surgeons performing anterior cervical discectomy and fusion procedures. The study, published in the January 2022 issue of Neurosurgery journal, found that you should choose a spine neurosurgeon if you want a better outcome. 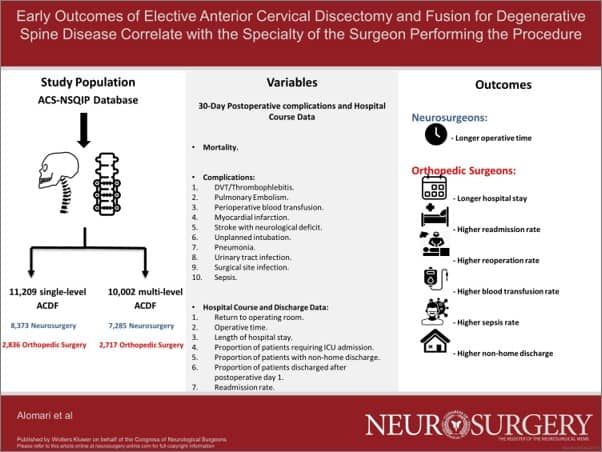 The study was conducted by researchers at the Johns Hopkins University School of Medicine. They   looked at how 21,000 patients fared after ACDF surgery. They compared patients who had surgery performed by a spine neurosurgeon vs. orthopedic surgeon for 10 types of complications and seven hospital measures. The patients had surgery at more than 700 hospitals across the country.

Patients who had ACDF neck surgery performed by a neurosurgeon fared far better. The study found that these patients experienced better surgical outcomes, including:

How safe is ACDF surgery?

Despite the differences between spine neurosurgeon vs. orthopedic surgeon performing ACDF, the procedure remains relatively safe and has high success rates at providing partial or complete symptom relief. For instance, ACDF patients in the study who had their surgeries with a neurosurgeon had only a 0.2% of developing a sepsis infection (0.7% for patients whose surgery was performed by an orthopedic surgeon).

ACDF is the most commonly performed neck surgery in the United States. It is used to treat several types of spine conditions that cause neck pain, including cervical radiculopathy, spondylosis, myelopathy, and herniated disc.  About 2,000 adults in Colorado are expected to undergo ACDF each year, using 2013 national ACDF prevalence rates (the most current available).

An ACDF is actually a combination of two types of surgery: a cervical discectomy and a cervical fusion. The surgeon first removes the degenerated disc, then fills the space with bone or other material to prevent it from collapsing. That material allows the vertebrae to grow—or fuse— together.

Between 85% and 95% of patients who had ACDF surgery said that it was successful, a study in Spine journal found. The study concluded that ACDF leads to significant improvement that is sustained for more than 10 years.

Why is a spine neurosurgeon vs. orthopedic surgeon better for neck surgery?

The patient outcomes were measured one month after neck surgery. Patients who had more complicated spine issues or were sicker at the time of surgery were more likely to have their surgeries performed by neurosurgeons, so the study controlled for those factors so that a balanced comparison of spine neurosurgeons vs. orthopedic surgeons could be accurately made.

Patients who had their ACDF neck surgery performed by a neurosurgeon vs. orthopedic surgeon had better outcomes due to the amount of training that neurosurgeons go through, the study says. “These differences in outcome metrics between the 2 cohorts can be explained by different trends in spine surgery training during neurological and orthopedic surgery residency programs.”

ACDF or Disc Replacement: Which is right for you?

The two most common surgeries to relieve pain caused by a herniated disc, slipped disc, ruptured disc, or a pinched nerve in the neck are ACDF or artificial disc replacement. Learn the pros and cons of both and which might be better for you in this free guide.

Experience of neurosurgeon vs orthopedic surgeon

Multiple studies have shown that a surgeon’s experience, measured by the number of procedures performed, results in better patient outcomes. For example, a study published in Neurosurgery found that complication rates of spine stenosis surgeries completed by spine surgeons who had performed fewer than 15 surgeries in four years was 38% higher when compared with spine surgeons who had performed 80 or more spinal stenosis surgeries during the same period.

A more recent study published in December 2021 online version of The Journal of the American Academy of Orthopaedic Surgeons looked at 642 patients who had undergone ACDF surgery and found evidence that higher levels of surgeon experience correlate with better outcomes. The researchers wrote: Increased ACDF case volume may lead to markedly decreased surgical time, blood loss, and length of postoperative stay as well as improved clinical outcomes in pain, disability, and physical function.

The same results are found in other types of surgery. A study in the Annals of Surgery in 2015 looked at 35 types of surgeries performed by 17,000 surgeons around the world and found that experience mattered in almost all procedures.  The researchers found that the amount of time procedures took, rates of recurrence of the condition, complication rates, requirements for blood transfusions, mortality and stroke rates all improved as the surgeon’s number of past cases increased.

When choosing between a neurosurgeon vs orthopedic surgeon, we recommend that patients choose a spine surgeon who has performed at least 30 of the specific spine procedure or has been performing the surgery for more than 5 years. These measures include surgeries performed during residency. (See more tips on selecting a spine surgeon.)

Bottom Line: Who should perform my spine surgery?

As a neurosurgery practice, of course we are partial to neurosurgeons performing spine surgery. But we also feel patients should understand the difference between a neurosurgeon vs. orthopedic surgeon when it comes to selecting a spine surgeon.

First, understand there is not a medical specialty called spine surgeon. A surgeon who performs spine procedures must either train as a neurosurgeon or an orthopedic surgeon. Orthopedic surgeons specialize in treating the musculoskeletal system, basically your bones and muscles. Neurosurgeons specialize in diagnosing and treating the central nervous system—your brain and spinal cord—and the peripheral nervous system—the nerves that connect your brain and spinal cord to your limbs and organs to relay signals.

Because the nervous system is so integral to function and quality of life, we believe neurosurgeons are better trained to perform spine surgery. We are not alone in that thinking. “The field of spine surgery will be completely taken over by neurosurgery [in the next decade],” said Sergio Mendoza-Lattes, MD, an orthopedic spine surgeon at Duke University’s Duke Spine Center in an online article for Becker’s Spine Review.